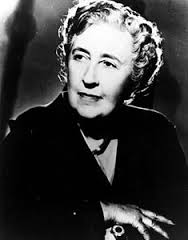 When it comes to books on crime, Agatha Christie is about the best. Most people believe that crime stories are thought up by males. Therefore, it is unbelievable, for some, that some of the best crimes have been concocted by a woman. The Guinness Book of World Records has proclaimed Agatha Christie to be the second best-selling author of all time. She comes in second after the Bard, William Shakespeare. With the honor of being the second best-selling author, Agatha Christie is also known for having the most widely translated number as her books have been translated into as many as 103 languages. But, who is Agatha Christie?

Agatha Christie was born in Devon, England. Although she did not have any formal education, she managed to teach herself to read and write at a very young age. She was the youngest of three siblings and at 16 moved to Paris to study vocals and piano. She was working as a nurse, during World War I, when she met her husband, Colonel Archibald Christie. This is also the time when she began writing her books. Maybe, he was her muse.

Her entrance into fictional crime began with the writing of The Mysterious Affair at Styles, in 1920. This story is about Hercule Poirot, one of the most interesting characters Agatha Christie ever wrote about. He was a retired Belgian policeman who is featured in most of Agatha Christie’s novel. He has an egg shaped head and black moustache. However, Agatha then wrote Murder at the Vicarage and introduced a newer character, Jane Marple. She was an elderly spinster living in St. Mary Mead, a quaint English village. She was the one who ended up solving most of Agatha Christie’s crime stories.

In 1926, Agatha Christie had professional success and personal failure. This is the year when she released the Murder of Roger Ackroyd which was later marked as a genre classic. In the same year, Agatha’s mother passed away and her husband admitted to having an affair. This was a bad time for Agatha as she was inconsolable and traumatized. During this time, she disappeared for 11 days and was not heard from. She was later found in a hotel residing under a different name. However, she proved to be stronger than anyone thought she would be. In 1928, she divorced Archibald, and two years later, married Max Mallowan an archaeology professor. While married to Max Mallowan, Agatha Christie travelled extensively and memoirs of her travels were recounted, in 1946, in Come, Tell Me How you Live.

Because of her success in crime novels, Agatha Christie became known as the “Queen of Crime Fiction”. Agatha Christie wrote more than 66 novels and various short stories and screen plays. She also wrote romantic movies under the pseudonym Mary Westmacott. Many of Agatha Christie’s novels have been made into movies. However, the most successful one to date is Murder on the Orient Express.