All about writing better sentences and paragraphs for psychology at uni. This video will improve your writing style and give you better control over the mechanics of writing .It will change how you think about writing and will improve how you actually write. Here you’ll learn studysmarter’s top writing tips for psychology students. These tips will help you write better sentences improve writing flow and fix common mistakes. Best of all you’ll be able to apply these tips to all the writing you do at uni and when you do your writing will be clearer, more interesting to read and have greater impact.

So let’s get started on:

When we write clear sentences our ideas make sense they’re easy to understand . This is good for us and it’s good for our readers. Make sure your sentences are clear by knowing sentence basics.

First indicate the subject early on in the sentence. The subject tells readers who or what the sentence is about.
Second follow this subject swiftly with a verb. Verbs are doing or being words they describe what is happening and when
third, if you need one, place an object straight after the verb. Objects tell readers who are what the verb is affecting
these three elements make an independent clause. An independent clause such as this one, with a subject and verb showing time, can form a simple sentence. You can make your writing interesting by expanding simple sentences. We can expand simple sentences and still maintain clarity by adding more words to the subject. You can also add more words to the object. Or you can add more words to the verb.
Another way to create interesting clear sentences is to build around clauses. We can add words around the central clause building in for example information about when, where and how.

We can put this kind of information before the clause and after it. But when we start adding a lot of extra information we need to avoid overloading sentence beginnings like this.

Overloading sentence beginnings taxes our readers memory and makes our writing less clear. we also need to avoid putting a lot of detail into the middle of clauses like this

Putting a lot of extra information in the middle can make sentences difficult to read. So to maintain clarity in long sentences, keep subjects verbs and objects close together and avoid overloading the beginning or the middle of sentences. As we’ve seen clear sentences don’t have to be short in fact variety and sentence length and structure aids clarity. We can vary our sentences in a number of ways. We can for example create compound sentences, that contain two or more independent clauses. We can join these with semicolons. We can use semi-colons where we would normally use a full stop, especially to join clauses that are similar in structure and closely linked in ideas. Or we can join clauses using coordinating conjunctions. You can think of coordinating conjunctions as fanboys using the first letter of words to remind you what they are. Here’s an example of a sentence joined by coordinating conjunctions. Or we can create complex sentences. Complex sentences can contain subordinating conjunctions. If you think of the word “sub” it’ll remind you of some examples of subordinating conjunctions like “since”, “until” end “because”. subordinate clauses can come before or after independent clauses. we can also join clauses using relative pronouns, like “who”, “which” and “that”. We can put relative clauses after subjects or objects. And finally we can create complex sentences using participles. Participles often end with “ing” like these words (being, doing etc). Participle clauses can come after the subject, before the subject or after the object. Another way to improve sentences is to express important actions as verbs. Compare these two sentences. Which do you prefer and why? Most people prefer the second sentence. It seems clear and has more impact because it expresses important actions as vivid descriptive verbs lost and feels. They like the first sentence less, because it buries important actions in nouns loss and feelings. Here’s another example. Have a read of these two sentences: 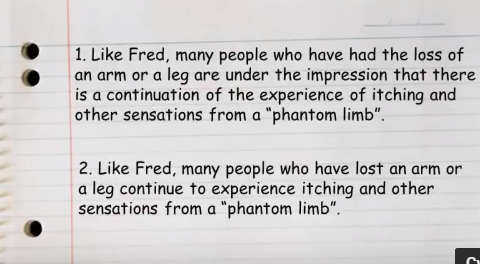 Again most people like the second sentence, best because it expresses important actions as strong vivid verbs: “have lost” and “continue to experience”. They like the first sentence less because it buries these actions in nouns. Another way of creating impact in writing is to use short specific characters as subjects. Compare these sentences, which do you prefer? Most people prefer the second sentence for two reasons:

When you edit your own writing follow these two steps^ 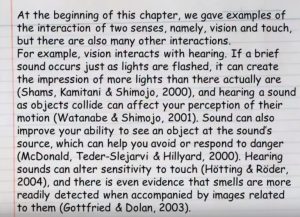 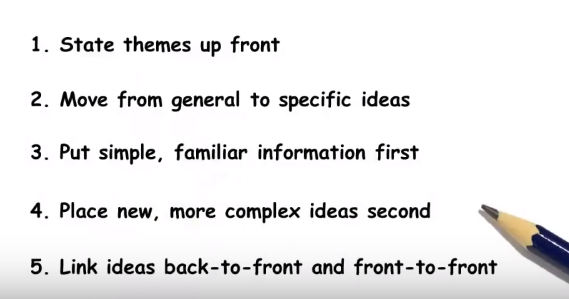 Once you’ve written clear sentences and cohesive paragraphs take time to review your work. Check for mistakes in paragraphs and sentences. Start by fixing paragraph problems first, looking out for three common mistakes . The first is false cohesion which is using transition words in ways that don’t make sense. Take a look at this paragraph which demonstrates this problem. 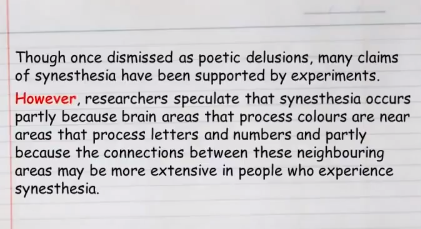 A word however doesn’t make sense here as it suggests a contrast between ideas, where there’s no contrast. If transition words don’t make sense replace them with phrases that link back to ideas in a previous sentence you. The second mistake

is insufficient development of ideas. In the first sentence for example the writer indicates that experiments back up many claims about synesthesia, but what exactly have these experiments been and what have they found? We can improve the writing by developing and supporting ideas with examples. But even with this change the paragraph contains another common mistake: the writer hasn’t acknowledged the sources of ideas. When we write for psychology we need to reference where we found ideas so that others can verify them. With examples and references to support ideas the paragraph is now suitable to include in a psychology assignment. When you fixed up paragraph problems take a closer look at individual sentences.

One common mistake is not using the correct verb tense so check, that you’ve used the correct word ending for regular past tense verbs to have part of verbs if you need to and “had have” not “had of”. the main verb tenses are these.

As we can see there are several forms of the past present and future tenses. Another common mistake is verbs that don’t match their subjects. Go through your writing and make sure that all your verbs agree with their subjects. Matching verbs to subjects can be tricky when subjects are long. The sentences here 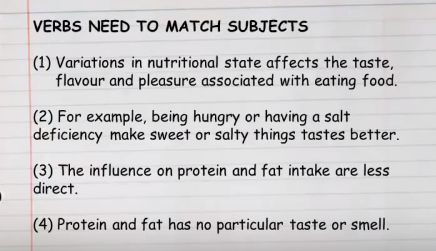 illustrates some common mistakes. Can you spot what they are and how to fix them? There’s a problem with all of these verbs: they don’t match their subjects. An easy way of finding the main word in a long subject is to make a “who” or “what” question with the verb and the object: what affects the taste variations what makes things better. Being hungry or having a salt deficiency.

What’s less direct? – The influence. What has no particular taste or smell? – Protein and fat.

A third common problem with sentences is not using pronouns that match the nouns they replace. Here are two example sentences. Can you spot the mistakes ? 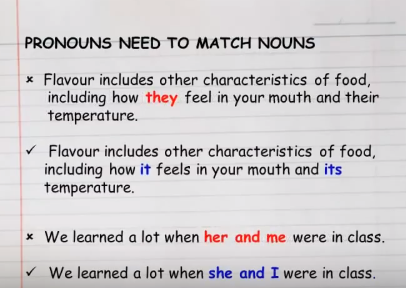 In the first example the noun is being replaced is “food”, so we need to write “it” and it’s . In the second example we need to use subjects so we need to use “she” and “I”. Other common mistakes have to do with sentence boundaries in other words not having control over where one sentence ends and the next one begins. This paragraph demonstrates common sentence boundary errors can you spot the mistakes. The first sentence uses a comma to splice two sentences together. there are two ways to fix the comma splice like this one is to place a full stop between the sentences. The second way is to put a semicolon between them. The second sentence isn’t a sentence at all it’s a sentence fragment that doesn’t contain a verb that shows time. Again there are two ways to fix this. One is to join the fragment to another clause. The second is to add a subject and change the verb to one that shows time.

The third sentence is a run-on sentence. It includes two sentences that need to be split up. One way to split these up is to insert a full stop between them. Another way is to use a semicolon and a transition word, if appropriate.

Combine and condense the last two sentences and the paragraph will be better still.

If you fix sentence boundary errors your writing will be much easier to read. Remember, you can fix common mistakes if you look out for these five things: 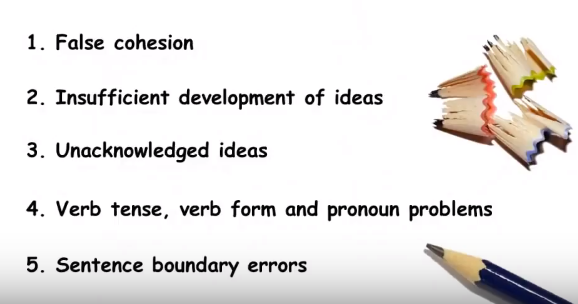