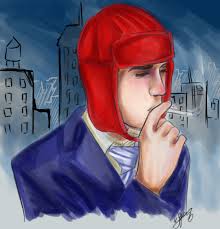 The Catcher in the Rye is a novel by J.D. Salinger. It is a story, set in the 1950s, and is narrated by Holden Caulfield. Although not very specific about the demographics of the location, the reader gets the impression that Caulfield is narrating the story in a mental institution. His story is centered on the things that happened when he was 16 years old. This essay is about Holden Caulfield.

Although not many would agree, although this may be a minority, Holden comes off as a hero. His ability to express things and his discontent makes him a very enigmatic person with the readers. However, Holden is not completely there. He is eccentric and kind of crazy. The signs are quite apparent in his behavior and his actions. For example, he attends and fails four schools, he has a complete lack of interest in his future, and his is in a mental hospital and visited by a psychoanalyst. He is also unable to connect with others. The story gives the reader two examples from his past for his mental state. These are his brother, Allie’s death and one of his schoolmate’s suicides. However, this still does not explain to the reader of Holden’s disorder.

Holden Caulfield is a very peculiar person. This is very noticeable in how he judges everyone and everything. He is extremely critical of people. He criticizes boring people, insecure people, and phony people. Holden’s ability to judge people is extreme. It is so extreme that sometimes, in the novel, he comes off as very amusing or funny. He is extremely intolerant and critical of the “phony” people more than the boring or insecure ones. He thinks people assume different demeanors in certain places while doing and acting in a different way in other places. “Phony” , to Holden, means superficial. He thinks these people are superficial, when, in fact, he views them as superficial when they are actually not so. This also shows the reader that Holden is very disturbed.

Another facet towards Holden’s character is his attitude towards sex. He is very interested in sex. He spends a major portion of the novel trying to lose his virginity. He feels that sex should not be casual and should only happen between two people who care about each other. The understanding that sex can happen in a casual sense astound

s and upsets him a great deal. He is also ashamed of the fact that he is aroused by women he does not care about. For example, Holden is aroused by Sally Hayes. Although he thinks she is “stupid”, he cannot help himself and agrees to go on a date with her. He is also disturbed by the fact that kinky sex turns him on. Although he doesn’t like it, he cannot help but be amazed and turned on by it.

Holden Caulfield is a child on the brink of adulthood. He is uncertain where he belongs in his life and is trying very hard to understand life. His perceptions about his surroundings and his judgmental ways, makes this task even more difficult for Holden.