Genetic drift is one of the major mechanisms that drive evolution. Natural selection is better known as the driving force behind evolution, but genetic drift is probably an equally important mechanism. Genetic drift is the gradual change in the genome of populations over time, even in the absence of natural selection. Natural selection works on mutations which impact survival, favoring those which enhance the chances of survival. It is therefore the mechanism behind adaptation, the process of gradually “fitting” an organism to a particular niche in a given environment. Genetic drift, on the other hand, works on all mutations, including those which offer no survival advantage (neutral). Over time, it can produce changes in the genome which can lead to speciation even without environmental pressure. It can even resist and counter the effects of adaptation to weaker natural selection forces, which is why many harmful mutations continue to exist.

An event or period in which the size of a breeding population is significantly reduced. This produces a sudden plunge in genetic variability, and greatly increases genetic drift as the population recovers.

Humans may have had a population bottleneck about 70,000 years ago, when the breeding population decreased to as few as 15,000 individuals. This catastrophe may have been caused by the eruption of Mount Toba in Indonesia, leading to global cooling.

Northern Elephant Seals have greatly reduced genetic variability as a result of a bottleneck that occurred in the 1890’s, when hunting by humans reduced their numbers to as few as 20 seals.

The Afrikaner population of South Africa is descended from a small group of Dutch settlers. Today, their descendents have an unusually high frequency of a gene that causes Huntington’s Disease. This is a Founder Effect which originates from the fact that the original settlers chanced to have a high level of this allele.

Genetic drift is a stochastic process – it operates on random chance, and is affected by factors such as breeding population size, the geographical spread and consequent isolation of breeding groups, ecological disasters such as famine, epidemics, volcanoes and earthquakes, and yes, even asteroid strikes.

The mechanism of genetic drift is very simple, but understanding it requires some background of how inheritance works. Here is a brief description by way of introduction, before we continue with genetic drift.

The DNA of organisms is made up of little snippets called genes. Each gene encodes for one protein. Many organisms are diploid, that is, they have paired homologous chromosomes. Each chromosome in a pair has a separate copy of the gene, so in a diploid organism, there are two copies of each gene, called alleles. However, these copies do not have to be identical. If they are, then the organism is homozygous for the trait expressed by that gene. If the two alleles of the gene are not identical, then the organism is heterozygous for that trait. I have a somewhat more detailed explanation here. Note that while in a given diploid organisms, only two copies or alleles of a gene can exist, in the population there might be many more. For example, for a given gene, there might be 9 variants or 9 alleles in the population living in one country. Any individual in that population has 2 out of those 9 possible alleles. The distribution of the 9 alleles in that population is static at any given time, but over the course of time it may change. It may be that right now alleles 2 and 7 are more prevalent, accounting for 50% of the entire population. But perhaps a few thousand years ago, alleles 5 and 9 were the most prevalent. This change in the frequency of different alleles over time is in fact evolution, and genetic drift is one important cause for it.

There are several ways in which genetic drift works. The most simple is to imagine a random disaster. Suppose there is a breeding population of 10,000 living in a given area. A volcano erupts nearby, and all the organisms living in proximity die. This has nothing to do with natural selection, because no member of the population is evolutionarily better suited to surviving hot molten lava, or to breathing searing hot poisonous gases.  In other words, this kind of disaster does not selectively kill the weaker or the ones with bad genes, it simply kills whoever happened to be too close. As a result of this disaster, half the population dies. The remaining half will probably not have exactly the same allele distribution as the whole population did. For example, for a certain gene A, which has 9 alleles, it may be that prior to the disaster , the population as a whole had an allele frequency distribution such that allele 1 occurred in 32% of the population. But because of random chance, more organisms with allele 1 lived near the volcano, therefore they died in disproportionately high numbers, and after the disaster the frequency of allele 1 falls to 18%. The same principle applies to all alleles of all genes.

A natural disaster can significantly change the genomes of a breeding population. After the disaster, as the population recovers, this change in the genome may well persist, or become even more exaggerated. Some alleles may completely disappear. This is because these alleles were not under selection pressure, since they offer no survival advantage.  The net result of such a disaster is a reduced genetic variability in the population. If it is severe enough, it is called a “bottleneck”, when only a small breeding population remains. During a bottleneck event, many alleles are completely lost, and the ones that remain may have totally different frequencies than they did before. The effects of such bottlenecks persist for many generations, and can often be detected tens of thousands of years later.

A similar mechanism operates in what is known as the “Founder Effect”. Suppose that out of a breeding population of 100,000, a few individuals decide to move away and start their own colony in a new territory. If, for example, 100 such individuals move away, it is very unlikely that the allele frequencies in that group would be similar to the general population. This is simply a form of sampling error – when you take a small sample out of a large population, it does not reflect the larger population because of sampling error. A lot of work has been done in the field of statistics on how to deliberately choose samples that are representative of the population, for purposes such as polling. However, in the scenario described above, there is no such deliberate selection of the sample. Often it is totally accidental, as when a few rats or bunnies escape a ship docked at port, and invade new territory.

The result is the same as that for a natural disaster. The new population does not represent the larger population whence it came. Some alleles might be totally absent, others might exist in very different ratios. Since the new population is cut off from breeding with the original population, its further development depends very strongly on the genetic base on which it was founded – the genomes of the few dozen or hundred organisms that were part of the initial migration. As this population expands to occupy its new territory, its genome will continue to be different from that of the parent population.

But even aside from migrations and disasters, genetic drift continues to play a role in every population. This is simply random chance working over a period of time, accumulating changes. Random chance operates at many levels, such as:

These are stochastic processes. If you have a sufficiently large population, then they will tend to even out over time, and not much will change. But it so happens that while populations may be large, breeding populations are often quite small. A breeding population simply means the local population with which an organism is likely to breed. There might be millions of frogs across the world, but if a given frog’s territory is 1000 yards, it is unlikely to find a mate from farther away. Very often breeding territories are broken up by geographical barriers as well.

In a relatively small population, stochastic effects can produce drastic changes very rapidly. These changes can accumulate to a point that speciation occurs. It is likely that geographically isolated small populations lead to many speciation events over time.

Genetic drift is something that was unknown in Darwin’s time, and therefore it is an important way in which modern evolution theory differs from “Darwinism”. Given the enormous significance of genetic drift, this is a very important difference.

Here’s a simple simulation to show how genetic drift varies with population size. Assume that the original population consists of organisms that have two alleles of a particular gene, indicated by the red and blue squares. Assume that these two alleles are exhaustive (every organism in the population has either a blue or red allele) and mutually exclusive (they can only have red or blue, not both), and equally likely (both are equally distributed, so 50% of the population has allele A and the remaining 50% has allele B).
The stochastic element was added by using a pseudorandom number generator (in Matlab). A random number between 0 and 1 was generated for each organism. A value greater than 0.5 indicated reproductive success, and less than 0.5 indicated reproductive failure. Choosing the 0.5 value means that the “selection” mechanism is neutral, it is not weighted in a particular direction (such as a trait that was under natural selection would be).

If the organism reproduced, two copies of its allele were placed into a group representing the next generation. If it failed to reproduce, its allele remained only in its own generation. Over time, the older generations were allowed to die out. 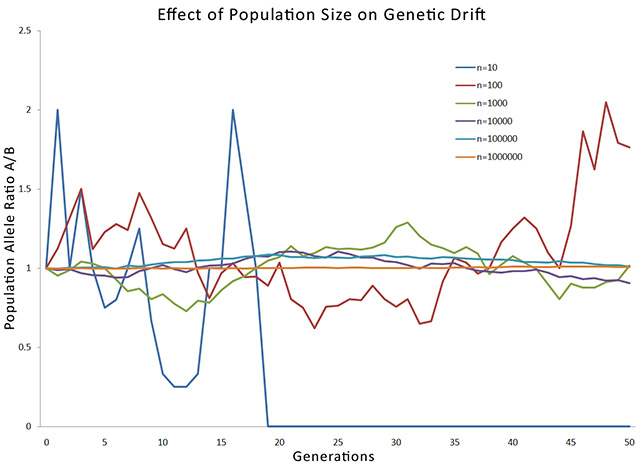 Simulation of genetic drift over 50 generations for starting populations of different sizes.

The process was repeated over several generations, each time applying a random number check to every organism. After a number of generations, the results were plotted. The graph shows starting population sizes of 10, 100, 1000, 10000, 100000 and 1000000 organisms. The simulation for each population was carried over 50 generations.

The x-axis shows time, represented by generation number, from 0 to 50. The y-axis shows the ratio of the two alleles, A and B. In the beginning, at Generation 0, all populations have a ratio of 1, meaning that both alleles occur with equal frequency. As can be seen, the smaller populations show a marked variation over time, while the larger populations are much more stable. The graph for the smallest population of 10 organisms hits zero at around generation 18, showing that at this point, allele A completely disappeared from the population. Of course, once an allele disappears, it can never return.